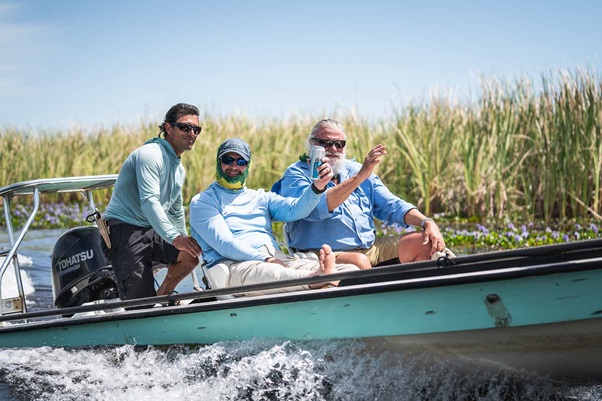 The Golden Dorado is an aggressive predatory fish species found in the freshwater rivers of South America. This invaluable piece of wildlife in the region is known for its strength, immense size, and unique beauty. Dorado Fly Fishing Argentina is a popular pastime because of the species’ broad presence in the Paraná, Mamoré, Chapare, and Paraguay rivers. Additionally, the Río de La Plata and Iberá Marshland are two very unique areas where dorado can be targeted up close in shallow waters, creating exciting fly fishing opportunities.

Dorado Fly Fishing is one of the most popular outdoor experiences that brings to Argentine waters anglers of all skill levels from around the world. The golden dorado is a coveted trophy for anglers worldwide, mainly because of its violent strikes and acrobatic fights. Known as the Salminus brasiliensis, “amarillo”, “Pirayú” (which in Guaraní language means “yellow fish”), or simply dorado, Golden Dorado, this fish is found in tropical, warm waters.

In the southern reaches of the dorado’s territory lies the Río de La Plata, sometimes called “the sweet sea” because of its breadth and its brackish water. There the Dorado prowls and is one of the apex predators in the ecosystem. The Dorado utilizes the Río de La Plata’s tributaries connecting the five countries that feed the delta: Argentina, Paraguay, Uruguay, Bolivia, and Brazil.

It’s important to note that the Argentinian Dorado is migratory, traveling between its favorite hunting grounds and breeding grounds. Although it is a big and heavy fish, capable of weighing more than 44 pounds, the angler does have a few advantages when targeting this predatory fish. Firstly, dorado tend to live very close to the surface, around 30 feet deep, making it easy for anglers to get their lures and flies in front of the hungry fish. Secondly, dorado are hyper-aggressive fish, and will take every opportunity to get an easy meal, which leads to exciting action on both the fly rod and light conventional tackle. 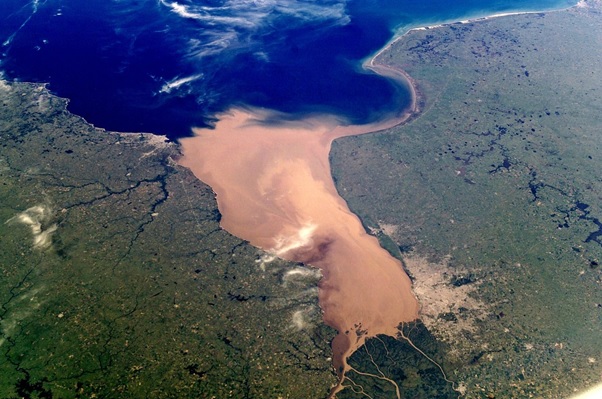 Where can the Golden Dorado be found?

Fly Fishing for Dorado in Argentina is a long-standing and traditional sport. The Paraná River watershed is one of the biggest drainage systems in the world and the second largest in South America, here, some of the world’s largest dorado can be found as they migrate up and down the river.

The dorado thrives in river currents, where it can easily ambush prey as it gets chased through rapids, over rock gardens, and through log structures. In fact, the fish are rarely found in slow-moving or still waters. They can easily adjust themselves to swim through stiff currents and rapidly changing water conditions, a by-product of which is their overall fitness and brutal strength displayed when they’re hooked. These predators have a predilection for waiting to ambush behind structures in the water where they are likely to find their prey swimming past.

What are the Main Characteristics of the Golden Dorado?

The characteristics of the waters they move through help shape key characteristics of the Dorado. They are born with strong muscles and voracious appetites. As mentioned, they are big fish, with some measuring over 3 feet long and reaching weights in excess of 40 lbs. Dorado can live to around 14 years and prefers to forage on mojarras, catfish, and their favorite meal, the sábalo. 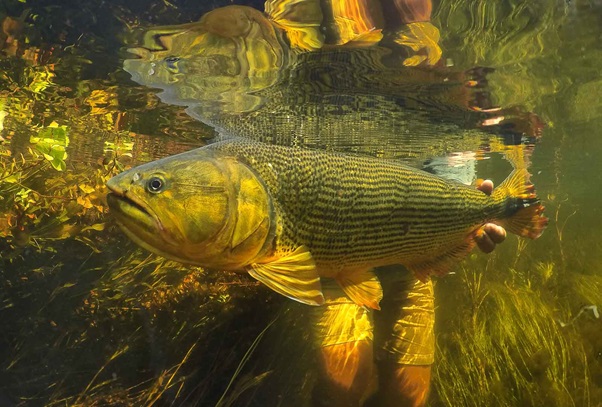 How Hard is it to Catch a Golden Dorado?

Despite its size and aggressive nature, dorado fishing in Argentina is not as difficult as you would think, thanks to their preferred hunting grounds. Although they are found in abundance in a few areas, the dorado was declared a “National Fish of Interest” by the country due to the growth in popularity of the species in the sport. It was put on the list after officials and anglers noticed a decline in the number of the big dorado in recent years, sparking a growing need for conservation efforts.

Dorado are powerful, cunning fish and require an equally deceptive angler to fool them and lure them in. Luckily for anglers, the dorado’s aggression usually gets the best of it, and they’ll happily take larger streamers and poppers when presented correctly on the fly rod.

What is the Best Season for Golden Dorado?

The best time to target golden dorado is during Argentina’s spring and summer, beginning in October and running all the way through April. It is during these months that the species migrates upriver, making their way to their spawning grounds in the upper reaches of the large watersheds they call home.

Tips For Planning Your Vacation

Document Retrieval: What Kinds of Records Can Be Recovered?